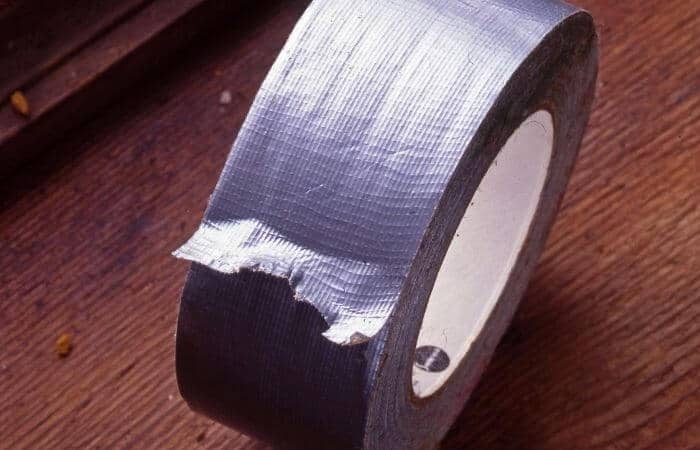 Duct tape is water resistant rather than waterproof, it is good at preventing water penetration for a short period of time.

Prolonged exposure to water will eventually cause duct tape to fail and water will then leak through.

You can buy purpose made waterproof duct tape from some manufacturers, but standard duct tape will not be fully waterproof.

There are countless videos of people performing all kinds of waterproofing miracles with duct tape, for example you may have seen someone successfully patch a hole in a boat or a roof using duct tape.

Duct tape does work well for jobs like this but only in the short term – don’t make the mistake of thinking that duct tape is a long term fix for a hole in a boat.

It works in cases like these because it repels water.

In fact duct tape was previously called duck tape due to the way that it repelled water being similar to water rolling off a duck’s back.

It is able to repel water so well due to the way it is constructed, it consists of a layer of glue, then a layer of mesh fabric which has a polyethylene plastic coat – this is what gives the tape its water resistance.

Why Isn’t It Fully Waterproof?

The primary weakness of duct tape is the glue or the sticky side which you stick to your boat or whatever it is you’re fixing.

Over time the glue will peel away from the surface, exposure to water quickens this meaning that duct tape should only be used as a temporary fix.

Some good alternatives to duct tape which are waterproof include Gorilla tape and Flex tape.

Interested to find out how other types of tape fare against water?

link to Is The Ring Doorbell Waterproof?

The Ring doorbell is water-resistant, but not waterproof.  The key is in the IP rating, all waterproof products typically have an IP rating.  However, Ring doorbells do not have this...

No, Zinc is not waterproof but it can be used to help protect other metals from high levels of corrosion when exposed to water. Rather than being used in its pure form, zinc is most often used to...