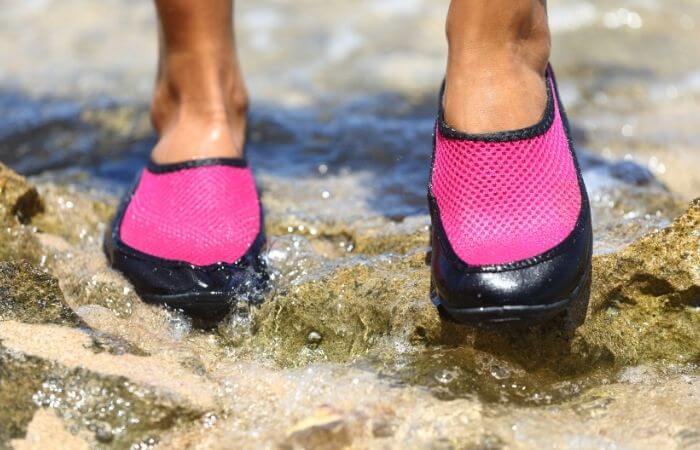 Neoprene can be waterproof.

Neoprene is made in two forms:

Closed-cell neoprene contains nitrogen which both insulates and adds buoyancy to the neoprene.

Wet suits are usually made with open-cell neoprene, the open cells trap air which creates a tight seal against the divers’ skin, keeping them well insulated and warm.

For a closed-cell wetsuit to achieve the same amount of warmth it would need to be twice as thick, so heavier and more inflexible making it less practical.

Neoprene is a form of synthetic rubber that is made from something called polycholoprene.

Polycholoprene is composed primarily of carbon and hydrogen.

Polychloroprene chips are melted and mixed with carbon and foaming agents (and other things such as elastic if required) before being baked in an oven to make neoprene which can then be cut up and used as required.

The Origin Of Neoprene

The invention of Neoprene was inspired by a lecture from Fr Julius Arthur Nieuwland on acetylene chemistry. In this lecture he explained how he had managed to create a jelly that firms into an elastic compound like rubber.

Dr Elmer K. Bolton of DuPont attended this lecture and later purchased the rights to the invention from the university.

The early product had a terrible smell which made it hard to sell commercially. After tweaking the development process the smell was eradicated and it was sold under the name DuPrene.

This was changed to Neoprene in 1937.

What Is Neoprene Used For?

Neoprene is an incredibly versatile materials with hundreds of uses, below are some of the more common everyday items which make use of Neoprene:

Neoprene was highlighted during the Covid-19 pandemic as being a material that is ideal for face masks.

Neoprene masks can filter out 99.9% of particles as small as 0.1 microns, coronavirus particles are around 0.125 microns.

Neoprene is a flexible rubber, which means it can be easily used for fashion and utility clothing.

Closed-cell neoprene is the perfect material for making wellies that are flexible enough to allow people to walk around easily while also being completely waterproof.

This type of neoprene is typically made from low resistance polyurethane which is known for its ability to return to its original shape, making it ideal for bags and cases.

Neoprene pads are sometimes used in engineering to help evenly distribute force between load-bearing elements such as concrete or steel.

Most dishwashing gloves are made from latex, however latex allergies are fairly common.

Closed-cell neoprene gloves make a good alternative due to their chemical resistance, durability and of course the fact that they are waterproof.

Neoprene is resistant to most types of oil, so your own skin oils will not degrade it.

Other Uses For Neoprene:

Of course there are countless more uses for Neoprene, including: