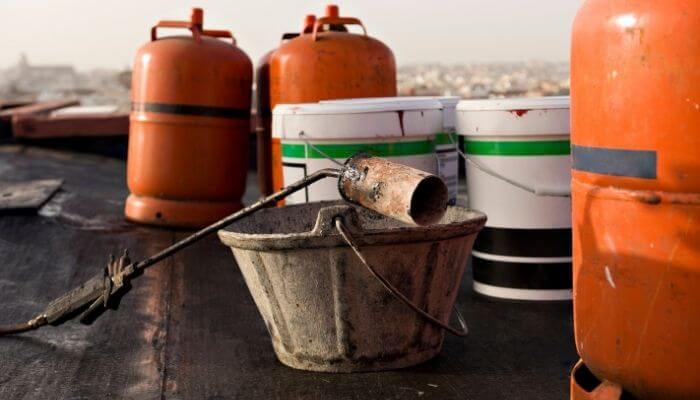 You may have heard of roofing felt being called roofing underlay.

Roofing felt, or roofing underlay, is waterproof and is also pretty good at insulating, which is surprising considering that it is often not a very thick material.

Roofing felt is waterproof in that if you were to create a bowl shape with the material and pour water into it, then the water would evaporate before it ever gets all the way through to the other side to start dripping out.

A Temporary Alternative to Lead

Lead is still used for roofing, though it has been gradually replaced by newer and more modern materials.

It is possible to replace lead with roofing felt, but the common understanding is that roofing felt will need to be replaced over time whereas lead (and its alternatives) will last for decades.

Even with lead or its alternatives, people still add roofing felt for the added protection against the elements and against water.

Some roofers use roofing felt rather than lead (or its alternatives) in areas where the weather or the elements are not too harsh, it is also commonly used to waterproof sheds.

When an overly durable roof is not necessary, roofing felt is a very cheap alternative to something like lead.

A Waterproof Layer on Your Roof

When people think of “felt,” they think of the soft stuff we all used in school, but roofing felt is a durable and tough material.

Think of it like a thick plastic underlay material, perhaps as durable and strong as a fairground tent.

When the frame of your roof and its rafters are fitted, the roofing underlay is added before other components like the tiles.

This protects the wood below from moisture and heat from above, which is a possibility since your tiles/slates/shingles may come loose and expose the roof to water, or they may heat up which may otherwise damage the wood.

There are actually many types of roofing felt, and some of them do degrade.

In fact, animal hair used to be used as roofing felt, which was water-resistant, but would degrade over time.

Traditional bitumen sarking felt is a very cheap option, but over time the material degrades, and the under-woven material becomes brittle and starts to fall away.

Other varieties of roofing felt may rot or weather away.

Modern roofing felt does degrade, but the more you pay, then the less quickly it degrades to the point where it is almost as good as having a lead (or alternatives) roof.

The Type of Roofing Underlay

There are classifications for roof underlays.

For example, the British Standard BS 5250 has HR and LR.

High Water Vapour Resistance Underlays (HR) have a very high water resistance but need some type of ventilation. In many cases, the loft is an open space, and that provides the ventilation needed for these types of roofing underlays.

The LR underlay varieties are divided into airtight and air-permeable.

There is a middle layer of sarking felt that is vapour permeable, which means that a high concentration of water on one side will eventually make its way to the other side.

As you have read, there are many types of roofing felt that seemingly allow water into the house. It doesn’t sound like these materials are very good at being waterproof, but there are two reasons for that.

The first is that roofing felt has its limitations and the weather will get the better of it if it is exposed to the elements over a long time (perhaps through missing tiles on the roof).

The other reason is that roofing felt needs to dance the line between waterproof and fit for purpose.

For example, you could just wrap your roof in polyethylene, and it will be waterproof, but even a tiny hole will let in water, and it won’t let the wood breathe, and it won’t allow a buffer for wind impact, nor will it help protect the roof frame from extreme heat and cold.

All of these properties are asked of roofing felt, so it is easy to see why cheaper varieties are only waterproof for a certain amount of time before they need replacing.

They are not just trying to keep out the water, they are also helping to maintain the integrity of the roof and protect the frame at the same time.

Is roofing felt so waterproof that you could line your pool with it?

Yes, it would keep the water in fine, but it wouldn’t last very long when compared with the alternatives out there for lining pools. Its purpose is to go onto roofs and do its various roles.

You could line your pool with it, but it would be prone to damage, it would degrade, and it would probably contaminate the water with some nasty chemicals.

Many types of roofing felt are waterproof, and even the cheapest are highly water resistant, but in terms of being fit for purpose, they should only be used on roofs.

link to How To Waterproof A Tent In 5 Steps

Getting a new waterproof tent can set you back at least several hundred dollars, especially if you want a good one.  Using your old one in inclement weather is possible, but you’ll first...

Continue Reading
link to How To Waterproof A Door: 5 Steps

Ensuring that exterior doors are 100% waterproof is vital, particularly during the wet winter months. A fully waterproof door will help keep your home dry and warm while also minimizing any damage...