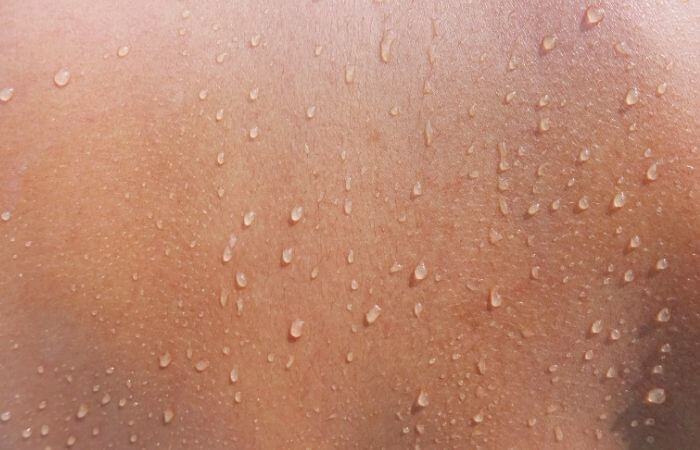 Skin is waterproof, yet parts of it are only water resistant.

Your skin allows fluids and oils to pass one way through it and not the other.

It allows water to enter part of the way into the body, and not all the way, and yet there are some fluids that can make it all the way through to your bloodstream such as high volume alcohol.

Plus, skin is able to repel water and excrete water that it has absorbed.

What is Water Resistant and Waterproof?

A common problem that used to occur in the jewelry industry was the misunderstanding that came with waterproof watches.

In fact, very few wristwatches were genuinely waterproof. They were just very good at being water-resistant.

There are important differences between waterproof and water resistant.

If a wristwatch is waterproof, then you can submerge it underwater for a very long time, pull it back out, shake it, and the watch would be as good as new.

With most high-quality watches, if you drop them in water, you can pull them out and they are as good as new.

However, leave them underwater for a long time, and they stop working because they are only water-resistant and not waterproof.

However, most raincoats are very water-resistant, but if you leave them in a bucket of water, they become soaked because they are not technically waterproof.

Your skin is waterproof, but parts of it are only water resistant.

Yet as a whole, your skin is waterproof because your insides are full of water, and you are not leaking out all over the furniture.

On a similar note, after swimming in the pool all day, you are not swollen up like a beach ball because your skin has not let the water in.

Ever played a game like Resident Evil and wondered how a health spray could possibly work since drugs cannot be absorbed through the skin?

We can absorb things like nicotine through our skin, but many drugs cannot be administered via the skin because our skin prevents them from entering the body.

However, if you understand the makeup of skin, you may be able to re-engineer drugs to be applied to the skin.

Turns out that there is a reactive layer of fat in our skin that actually acts as a gatekeeper.

Scientists froze skin and then cut it into tiny layers.

They froze the skin so they could see what it looks like when it is fresh and recently active, as opposed to cutting dead flesh that moves and warps when it is cut.

They could see the several layers that skin contains, including the two layers of fatty material that make our skin both flexible and waterproof.

Computer models have been constructed to help identify which drugs can be administered through the skin.

If drugs were more commonly administered through the skin, then we could avoid the many problems that come with ingesting drugs and injecting drugs.

The skin has Lipids that have a hydrophilic head and two hydrophobic tails.

This means that if the Lipids are laid in a layer, one side repels water while the other attracts it.

So, imagine many matches stood up in a layer. The head of the match attracts water and the tail repels it.

In other words, two matches are connected tail to tail.

The heads on both sides are attracting water, but the combined efforts of the two tails stuck together are super repelling water.

If that explanation was a little too squiffy, then think of a jam sponge cake.

When you pull the cake apart, you have two pieces of cake, and both have jam on them. Imagine that the jam is water-repelling, and the cake is water-soaking.

Put the cake back together again, and that is how your skin works.

The jam hates water, but the cake itself loves water.

Also Read: How To Waterproof A Cast For Swimming

Why is the Outside and Inside Of The Skin Not Waterproof?

Remember the cake example, how the cake parts of a jam sponge are water absorbent, but the jam in the middle is water repelling?

There are two sides of your skin that absorb water.

There are the outer layers, and the inner layers.

The inner layers absorb water because they need to allow blood, moisture and nutrient molecules to reach your skin to keep it alive.

Eventually, your blood and fluids hits the two-layer fatty layer and are unable to move outside any further without the help of pores and various other regulatory systems.

Water can be absorbed on the outside of your skin to keep it moist, flexible and even stretchable.

If we do not find the correct amount of water for the outer layers of our skin (through air humidity), then our body releases fluid and oils to keep the outer layer of skin moist and flexible.

If the outer layers of skin were unable to absorb water, or were completely waterproof, then our skin would have to be hard and scaly in order for us to move.

You will notice if you ever have dry skin that the skin becomes far less flexible and far more prone to rips and tears if it is not kept moist and oiled.

What About Water Under Pressure?

Normally, when you are considering if something is waterproof or water resistant, you ask if it can be submerged underwater for a long period without sustaining damage, and you ask if water can be forced through under pressure.

A common misconception is that water cannot be forced through under pressure, but this is almost always in cases where the flesh being tested on is dead.

Some evidence suggests that water can be pushed through living skin under pressure, but it is difficult to prove.

When scientists try to prove that skin will allow water to pass through while under pressure, it is hard because how do you measure correctly if tiny amounts of water have passed through into the body?

When scientists tried to experiment with a loose piece of skin, like an ear lobe, whatever water went through the first layers of skin were absorbed by the body before they could reach the other side of the ear lobe.

Finally, we should remember that water is a solvent.

Mr. M.J. Narishmhan and Miss V.G Ganla may have proven that water can be passed through the skin under pressure, with small amounts of water being pushed through skin over a very long period of time.

Common theories that skin is waterproof because it doesn’t allow water through under pressure are probably true, but they are not conclusive.

Which is the Least Waterproof Part of Your Skin?

Your fingertips are the least waterproof pieces of skin on your body. This again comes from Narishmhan and Ganla.

They helped to prove that your fingertips wrinkling up was not just a reaction to water absorption but was actually a reaction by your skin to osmotic pressure.

There may be special receptors in your fingertips that control their vascularity to the point where they let water both out and in (albeit in tiny amounts).

The fact our fingertips let in more water than other areas of skin on our body may simply be due to the intersection where the nail protrudes from the skin.

In reality, you would think it was your eyelids that were the least waterproof, especially when considering how thin they are.

However, you would have to stretch your eyelids to almost tearing point in order to make them as un-waterproof as your fingertips.

Also Read: Best Waterproof Tape To Use On Skin

The Composition of Skin is Very Complex

Let’s remember that skin is not like a piece of polythene.

Your skin may wrinkle when you are in the bath because it has absorbed some water, but a thirsty person will still die of thirst no matter how long they lay in the bath.

Still, if you are trying to avoid a pandemic by taking a bath in alcohol, then think again because not only will it kill you, it is also a very nasty way to go.

On the other side of the spectrum, those who claim a hot bath helps cure their hangover are actually making it worse, though the relaxing nature of a warm bath does have a soothing effect that helps to calm some of the nastier symptoms of a hangover.