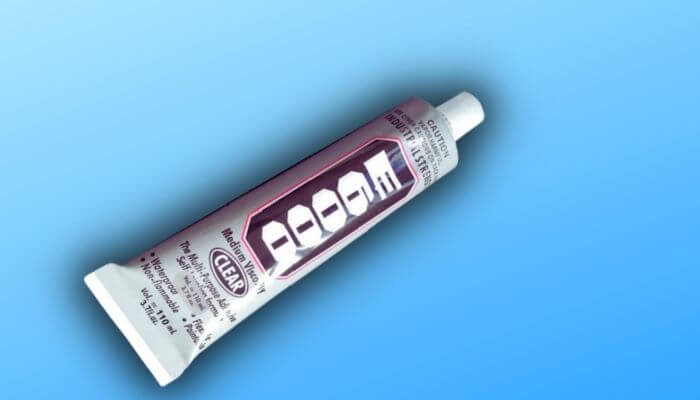 E6000 is a strong adhesive that is waterproof.

If the glue is completely cured (dried), then it is waterproof.

If the glue is not fully dried, then it is not waterproof because the solvent nature of water or other fluids may mix with the glue and affect its composition.

On a similar note, if you were to submerge the cured E6000 glue in freshwater or saltwater, then it wouldn’t take damage or absorb the water because it is waterproof.

But, if you put uncured or partially cured E6000 glue into fresh or saltwater, then it would react with the glue and (in a way) would dilute it.

Over a long enough period of time, even E6000 will degrade to become less waterproof.

The versatility and strength of E6000 put it above other adhesives available.

It can be used to stick metal, wood, leather, vinyl, ceramics, glass, rubber and many plastics.

When it sets it has a flexible, rubbery consistency that does not crack.

As well as these properties it is non-flammable which makes it popular for electrical and computer applications.

Because it dries clear and can be painted, it can be used in jewellery making.

Even though silicon based, E6000 is not for use on silicone because it cannot form an adhesive bond.

Although it will work with many plastics, it is not designed for use on polypropylene, polystyrene or polypropylene.

Waterproof Under Most Circumstances

Once cured, you can put E6000 through the washing machine and it is still waterproof, and you can even stitch through it and it still remains waterproof except for the holes you made in it when you stitched through it.

Dry cleaning will damage the glue and make it less waterproof.

The glue is safe for washers and dryers but will weather more quickly if put in the drier. It is an epoxy rubber.

Contrary to what most people believe, most rubbers are not waterproof.

However, Epoxy rubber is, so long as it is correctly manufactured, applied, and cured.

Compared to other rubbers, it can take quite a bit of rough movement, damage and abrasion before it stops being waterproof.

Some people are concerned that when they seal items with E6000 glue, that the air bubbles in the rubber make it less waterproof.

This is not strictly true.

The air bubbles may lower the integrity of the glue by a very small margin, but it would be very difficult for even the bubbliest epoxy glue to suddenly stop being waterproof.

The glue with lots of bubbles in may not remain waterproof as long as a bubble-free application, but even under those circumstances, E6000 could hold water for quite a long time and still take a lot of damage before it finally aged and weathered enough to stop being waterproof.

Under What Circumstances is E6000 Glue Not Waterproof

If you have a new but damaged package of glue, then it may have already started curing, or may have been exposed to damaging chemicals.

You can still use the glue, but it may not be as waterproof as it should be.

If the glue has been weathered quite a bit through harsh conditions, then it may lose some of its waterproof nature.

However, it would require years of harsh conditions damage in order to make it less waterproof.

Repeated exposure to corrosive chemicals and/or heat may make the glue less waterproof, but even this would take a long time to happen.

If the glue is flexed too much, then over time it will age and will eventually become less waterproof.

Imagine that you created a roll of glue, perhaps the size and shape of a wax crayon.

If you were to bend the glue tube over and over, then it would wear away, weather away, and become damaged and less waterproof.

The act of bending creates heat within the glue, which eventually causes the bonds to break and the glue to weather away, age and break.

Like many glues, E6000 is damaging if breathed in as a form of substance abuse.

It is also very toxic to animals when either ingested or stuck to their skin, fur or feathers.

It also causes irritation to human skin and eyes, and though it gives animals cancer, they have never proved that extended exposure causes cancer to humans.

If you read online reviews of E6000 glue, you will see that many people receive broken or damaged glue.

This is because the glue has a very strong solvent smell that is a favorite of glue sniffers (solvent abusers).

Breaking open packages and sniffing the glue, or draining some out of tubes, is unnervingly common.

Sadly, once it is exposed to air, the glue starts to set, leaving the opened or damaged glue as unusable.

link to Is The Ring Doorbell Waterproof?

The Ring doorbell is water-resistant, but not waterproof.  The key is in the IP rating, all waterproof products typically have an IP rating.  However, Ring doorbells do not have this...

No, Zinc is not waterproof but it can be used to help protect other metals from high levels of corrosion when exposed to water. Rather than being used in its pure form, zinc is most often used to...