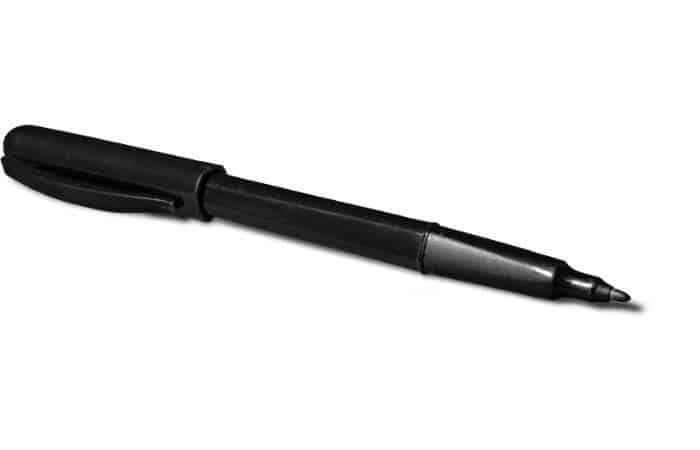 Sharpie markers are known as “permanent markers” because they’re advertised as waterproof pens that won’t fade or bleed when they’re exposed to water.

So is Sharpie waterproof?

As a rule of thumb, sharpie markers repel water and won’t fade when they come in contact with water to a certain extent.

However, the most accurate answer to this question is: it depends on many factors, such as the type of marker used, the nature of liquids used, and the medium it’s used on.

First, you should know that Sharpie markers actually refers to a popular brand of marker pens rather than the entire niche of markers in general.

Clarifying this is essential because a lot of people use the word “Sharpie” when referring to any kind of marker pen, and generalizing the information mentioned here on all kinds of markers might be a very expensive mistake!

They’ll easily bleed when exposed to water or smeared with a wet brush.

This is because the ink in these markers is slightly more polar than the ones used in sharpie’s ink.

In fact, even within Sharpie’s production lines, not all markers are permanent. A non-permanent sharpie marker is not waterproof and will bleed upon the slightest contact with water.

Since sharpies require special conditions to be fully waterproof and might not stand water in other situations, you can conclude that Sharpies are more accurately described as water-repellant than waterproof.

How Well Does a Sharpie Marker Hold Up Against Water?

Permanent markers use a specific ink that is made of electrically saturated and inactive ions. These compounds are known as “non-polar” ones, and they behave like oily substances.

On the other hand, water is a polar compound that repels nonpolar molecules, such as the ones making up the Sharpie’s marker ink. Therefore, Sharpie ink doesn’t dissolve in water.

Keep in mind that before sharpies dry up, it might have some polar particles that can dissolve in water (they’re used to help the ink glide on paper).

Before these polar particles evaporate, they can be smeared with water. So, recently applied sharpie markings might not hold up against water as reliable as dry old markings.

How Long Should You Expect it to Last?

The accurate way to test out Sharpie’s resilience isn’t by duration underwater.

Instead, you should assess it against pressure.

Since sharpies are resistant to water when used on sturdy paper, they can last underwater for a very long time without bleeding ink out.

However, even after they dry up, applying the water coloring brush over the Sharpie markings should be gentle.

This is because sharpie markers might bleed out very slightly when you apply consistent wet strokes over them.

When waterproof, Sharpie permanent markers can be used to label multiple items in wet places, such as refrigirators, freezers and, underwater tanks.

Also, Some watercolor artists might use water-resistant sharpies to outline certain parts of their drawings.

Make sure that you read the instructions of the Sharpie pen you’re using because the waterproof ones clearly state that on the pen.

Sharpie markers are also guaranteed to be water-repellant only when used on paper. The instructions mention that because using it on different surfaces, such as glass, might make them fade when exposed to water.

Lastly, the drier the markings, the more resistant to smudging and fading they get. If you’re water-coloring, make sure that you allow the sharpie markings time to dry up before you continue painting.

Sharpie pens are water-repellant when they’re recently applied but become more resistant to water as they dry up.