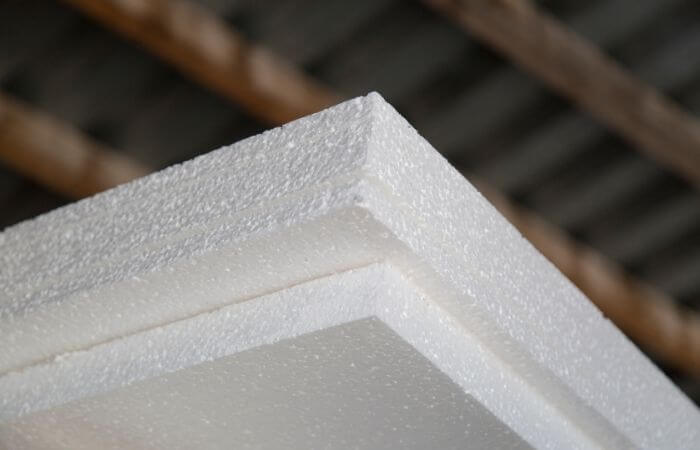 Styrofoam is the expanded version of polystyrene plastic, which is used in a wide variety of projects, projects, as well as construction.

But is Styrofoam waterproof?

Although styrofoam has a unique closed-cell design that shouldn’t allow water to seep through, Styrofoam is not entirely waterproof.

In the following article, I’ll walk you through everything you need to know about Styrofoam water resistance:

What is Polystyrene Foam?

Polystyrene is a highly versatile type of plastic that has tons of practical applications in various fields. Although polystyrene is a hard, solid, and clear plastic, it can be made into a foam-like material.

This is why the material is incredibly lightweight for its volume. Also, the material has a pretty stiff structure, which is why it’s commonly used in construction.

“Styrofoam” is actually the trademarked name of the company that makes closed-cell extruded polystyrene foam used for various applications, including thermal insulation.

As you know, a material is called waterproof if it’s completely impervious or impenetrable to water. In other words, such a material will not only allow any water to pass through, but it’ll also not absorb any water in the process.

For that reason, although polystyrene is a waterproof plastic, styrofoam isn’t entirely waterproof or moisture resistant.

In fact, this includes styrofoam as well as all other kinds of expanded and extruded polystyrene foams.

Although all these materials have a closed-cell foam construction, they’re made of polystyrene molecules that are linked together to form a huge network of bonded pellets.

Due to their construction, there are still some gaps between the expanded closed-cell pellets.

These gaps, known as “interstitial gaps”, are too small to let water pass through to the other side easily but not small enough to prevent it entirely from doing so.

In other words, with time, styrofoam interstitial gaps can be filled with water, which is known as “waterlogging”.

Logging happens when the polystyrene foam is exposed to high humidity for extended periods of time or when they’re immersed in water, such as in floating docks, buoyancy aids under boats, and hot tub covers.

Also, since extruded polystyrene is permeable to water, it doesn’t count as a reliable vapor barrier either. The only way to be used as a vapor barrier is by preventing waterlogging.

This is done by waterproofing the styrofoam using spray-on coating or plastic sheeting, but more on that later.

How Well Does Styrofoam Hold Up Against Water?

As you now know, styrofoam isn’t 100% waterproof and is rather classified as a material with very high water resistance.

The problem with styrofoam water logging is that once it happens, styrofoam loses its insulating properties.

The reliability of styrofoam as a waterproof material also decreases when used in winter conditions.

As polystyrene sheets absorb and store water, the expansion and contraction of water molecules as it turns to ice can compromise the pellets’ integrity and make the styrofoam piece break off with time.

How Long Is Styrofoam Expected to Last?

When it comes to stability, Styrofoam is incredibly well suited to last! The atoms inside the polymer are bonded very strongly to each other.

This makes it very difficult for water, salt solutions, acids, bases, and other corrosive substances to penetrate it.

Additionally, it means that polystyrene foam has a very low tendency to break down with time.

Not only that, but the materials have a natural resistance to accommodating living organisms, so it doesn’t grow mold or bacteria. This makes styrofoam excellent material for packaging and storage.

As you can see, the material is designed to be incredibly stable both chemically and physically. In fact, styrofoam has a theoretical lifespan that can last anywhere from 500 years to millions of years.

The only enemy of styrofoam’s extreme stability is sunlight. It’s highly sensitive to sunlight radiation and will start to break down upon long-term exposure in a process known as “photodegradation”.

If you’re using styrofoam to waterproof anything in the open, the continuous exposure to sun rays will affect the external shell of the plastic and turn it into a powdery discolored substance.

That’s why the actual shelf life of sun-exposed styrofoam insulation can last for a few years only.

Another reason why styrofoam isn’t entirely waterproof on a microscopical level is a process called “leaching”.

This phenomenon happens to styrofoam when it’s exposed to liquid (especially the hot ones) for a long time. The contents of the plastic start seeping into the liquid and contaminate it.

Despite not being fully waterproof, styrofoam is non-hygroscopic, which means that it doesn’t absorb moisture from the air.

Instead, it’ll only absorb water and moisture that comes in direct contact with it.

This means that as long as you’re not putting styrofoam in an unfavorable condition, it’ll be able to do its function properly. This includes insulation against elements of weather, such as heat and wind.

It’s also used for additional insulation for roofs against rain since they pour out directly and don’t get enough time to soak into the interstitial gaps of styrofoam.

How to Keep Styrofoam Waterproof

Some people spray styrofoam with waterproof sealants while others apply a coat of glue or plaster to get the job done.

Styrofoam, as well as all kinds of rigid expanded and extruded polystyrene foam, resist water for a short period of time.

However, they’re not entirely waterproof, so you have to waterproof them with sealants before exposing them to continuous moisture.