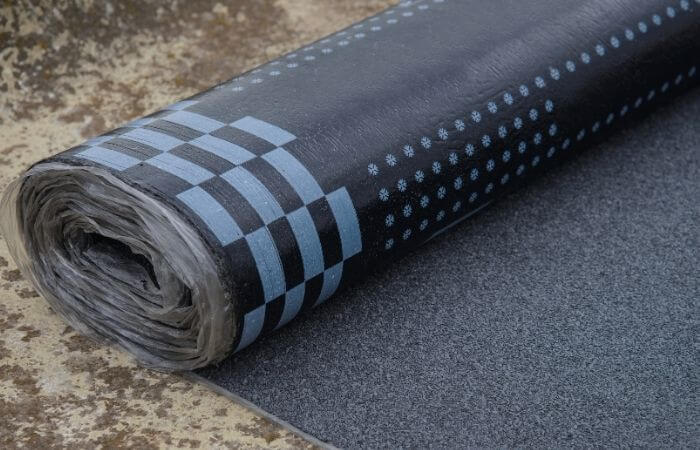 Understanding what each one does, in what circumstances they work best and how best to use them will help you to make good decisions when it comes to waterproofing your home, business, electricals, vehicles and more.

Below we talk you through some of the best waterproofing materials including cementitious coating, EPDM rubber, fiberglass, high-density polyethylene, liquid roofing, polyurethane waterproof coating, PVC and rubberized asphalt.

Cementitious coating is a modified polymer coating that forms a cement-based alkaline coating.

It is commonly used to protect concrete in areas where the ground is contaminated with sulfate, as this causes aggressive concrete deterioration.

It is a very hard-wearing treatment that also protects structures from water, acids and other chemicals as well as weather.

To apply cementitious coating the surface needs to be properly prepared with all oil, grease, and traces of chemicals contaminants completely removed otherwise the coating could be compromised.

The surface also needs to be smoothed off, usually by sandblasting if it is being applied to concrete.

Once this is done the Cementitious coating can be sprayed on.

Cementitious coating is used for things including:

As you can see it is extremely versatile.

This is thanks to its use of cement chemistry, which comprises a mixture of sand, cement, micro silica, fibre and styrene-acrylic copolymers.

When it is combined with lime a reaction is triggered which creates a durable waterproof seal.

It is applied in either a spray or liquid form, the spray is best for small applications such as a water tank where as liquid is used for large industrial scale projects such as brudges and coastal structures.

One of the drawbacks to cementitious coating is that it is inflexible, so it isn’t suitable for use on surfaces that are prone to movement such as metal roofs.

It is best suited for use on concrete where movement is minimal, once applied to this type of surface it will last for decades.

*If you are applying a cementitious coating to a drinking water tank the coating needs to meet a specific standard known as NSF/ANSI/CAN 61 to ensure that the water will not be contaminated with dangerous substances such as lead.

Ethylene Propylene Diene Monomer (EPDM) is a synthetic rubber that is great at resisting weather, UV, water and more.

It is widely used for a range of things including:

It can also be used where cushioning or elasticity is required due to its flexibility.

It is most commonly used in areas where it is vital that water is kept out so that it doesn’t interfere with electrics or get into a building or vehicle.

It is perfect for doors and windows because it both seals them and cushions them as they close, thereby minimizing damage to the door or window.

EPDM Rubber is a great waterproofing material for a number of reasons:

The downsides of using EPDM rubber as a waterproofing material is that it is usually quite thin.

So if you were using it to waterproof a roof it could easily be torn by debris from a storm or a loose nail being accidentally trodden into it.

It also can shrink slightly over the years which may eventually allow leaks in.

Typically it will be at least 10 years before any repair work is required unless it has been poorly installed.

Fiberglass is an extremely versatile waterproof material which is used for a wide range of applications including:

All of these need to be reliably waterproofed to avoid a dangerous failure. A leak has the potential to be fatal in the case of boats, canoes & kayaks.

Fiberglass is a great waterproofing material for a number of reasons:

Fiberglass achieves its rigidity and high chemical resistance due to its combination of interwoven glass fiber strand mats and a plastic resin binding agent.

Once cured it is extremely strong and completely waterproof.

The downsides of fiberglass are that it often requires re-gel coating every 5 years or so and it can create excessive airborne fibers which can aggravate respiratory conditions such as asthma in closed spaces.

High-density polyethylene (HDPE) is a type of thermoplastic made from petroleum.

It is an incredibly versatile material that is used for a wide range of waterproof products including:

It is known for its impressive tensile strength and impact resistance which makes it ideal for making pipes as it’s strength helps to minimize the risk of cracks and leaks.

HDPE waterproof sheeting is highly recommended for numerous waterproofing applications such as inside cavity walls or underneath roof tiles to prevent damp transfer.

HDPE it great at waterproofing for several reasons:

It is also recyclable!

The downsides to HDPE are that it can be difficult to bond.

You will find then when leaks occur in an HDPE pipe they do not occur in the body of the pipe itself but at the end of the pipe where the sealant has failed.

Liquid roofing is a liquid-based rubber that is sprayed onto metal roofing.

It is used for the same sort of roofing jobs that EPDM rubber is used on.

In fact, liquid rubber is said to be next generation of EPDM roofing sheets.

It has all the durability and weatherproofing that EPDM has but it has no seams (these are weak points for leaks) and it is far quicker and easier to apply.

Liquid rubber is a highly effective waterproof and air tight sealant which will stick to any surface so it can be used in a wide range of different applications, it is most commonly used for:

Liquid rooding is great at waterproofing for a number of reasons:

Be aware that the composition of liquid roofing will vary depending on who you buy it from.

It is typically made of some sort of mix of polymers, asphalt, polyurethane, rubberized aluminum and acrylic.

Polyurethane is a polymer made from organic elements that are connected together by urethane links.

While that might not mean much to most of us, one of the results of that is that it’s great at waterproofing!

Polyurethane is a low-cost waterproofing solution that has many uses including things like:

Polyurethane comes in many different forms and is a key ingredient in many waterproof products including things like Gorilla glue.

This is applied to a surface in a cold liquid form much like paint, no need to heat it up.

You can get odorless versions of it too which we recommend as polyurethane fumes can be dangerous if inhaled.

It is perfect for waterproofing flat roofs (or any roofs for that matter).

It is particularly good at defending against ponded water (this is any water which remains on the roof for 48 hours or more), where waterproofing materials that have seams are liable to weaken with continual exposure to ponded water before eventually failing and leaking.

Polyurethane waterproof coating will work even on pre-weathered, damaged roofs.

This is because it is completely seamless and as it is in liquid form it will fill all the contours of your roof evenly, giving a smooth watertight finish.

It is a great choice of waterproofing material because:

The downsides to this material are that some manufacturers recommend applying more than one coating and as each coat requires 24 hours to cure this can turn a simple job into a long and expensive one if you are paying for labour.

Unpredictable weather can also significantly lengthen the time it will take to apply it.

PVC is an incredibly versatile product used in a huge range of applications.

It is used to make many different products including:

PVC can be used as a waterproofing material in two different forms.

Rigid PVC is used to make pipes, doors and windows and items which require structural strength to perform.

In fact, around 50% of PVC resin produced is used to make sewage pipes due to its low cost and ease of use.

The addition of plasticizers to PVC makes it softer and more flexible allowing it to be used for things like cable insulation and plumbing seals.

PVC is a great waterproofing material for a number of reasons:

Be aware that PVC has a bad reputation for not being sustainably produced, this is very difficult to achieve with something which is produced in such large volumes.

Rubberized Asphalt is a composite material made of standard asphalt (that is used on roads around the globe) mixed with crumb rubber which is made from recycled car tires.

As of 2017, the rubberized asphalt market used over 25 percent of the United States’ scrap tires which accounted for over 62 million tires being recycled.

Rubberized Asphalt is used for:

Rubberized Asphalt is increasingly used for roads as it improves road performance in a number of ways:

It is less commonly used directly for waterproofing but it is very good at it.

Roads need to have a high degree of waterproofing otherwise water will seep through them and over time they will wash away the soil underneath creating a cavity that will collapse in on itself, often causing serious injuries or even death.

Rubberized Asphalt is often used on the flat roofs of commercial buildings or to tarmac driveways that have extensive weed problems.

This is because it is both great at waterproofing and it does a very good job of preventing weeds from growing due to its toughness, meaning it is very low maintenance.

Two things which make it particularly good at waterproofing are:

One of the downsides to rubberized asphalt is that the rubber and asphalt particles are prone to separate when being prepared, great care should be taken to mix thoroughly during preparation to prevent this from happening as this can significantly reduce its reliability.